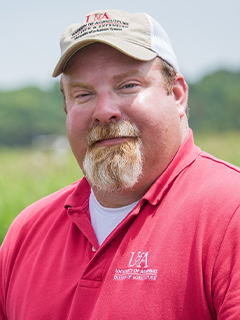 Dr. Jeremy Ross has worked for the last 25 years for the University of Arkansas System Division of Agriculture, Cooperative Extension Service.  He began his career in 1996 as a Program Associate in Plant Pathology.  In 2000, Jeremy become the first Corn and Grain Sorghum Research Verification Coordinator, and held that position until 2007.  In 2007, Jeremy became the Extension Soybean Agronomist with statewide soybean and edamame production responsibilities.  Jeremy provides applied agronomic research and educational programs for producers, crop consultants, industry personnel and County Extension Agents in Arkansas.  Results from his research are used to develop production recommendations including variety selection, optimum planting dates and seeding rates, use of inoculants, and fertility application for both soybean and edamame.  He is also involved with many state, regional, and national organizations.  Jeremy and his program have received numerous state, regional, and national awards including the John W. White Team Research Award from the University of Arkansas System Division of Agriculture, once in 2008 and another in 2015, the Distinguished Rice Research and Education Team Award in 2012 from the Rice Technical Working Group, and the Distinguished Service Award from the National Association of County Agricultural Agents in 2014, 2020 Soybean Research of the Year from the 23rd Annual National Conservation Systems/Southern Corn & Soybean Conference, and 2021 John W. White Outstanding Extension State Faculty Award from the University of Arkansas System Division of Agriculture to name a few.  Jeremy enjoys hunting and fishing, and any sports involving the Arkansas Razorbacks. Jeremy is married to his wife, Jenny, and they have twins Ava Ruth and Liam.