Should you test for SCN? 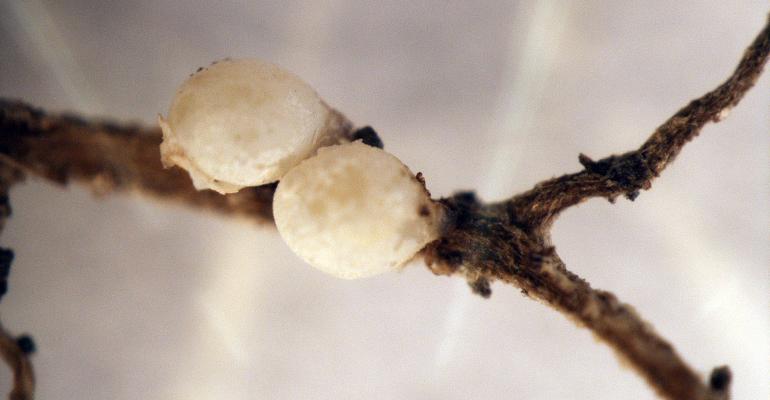 Soybean Pest Beat: The consensus among the CCA panel is that nematodes steal more yield than you think.
Oct 05, 2022
I’m seeing more articles and ads about soybean cyst nematodes. Is this just hype from seed companies to sell certain varieties? Should I test for nematodes? I haven’t had problems that I know about with nematodes.
The Indiana certified crop adviser panel answering this question includes Steve Gauck, regional agronomy manager for Beck’s, Greensburg; Andy Like, agronomist with AgriSelect Evansville LLC, Vincennes; and Dan Ritter, central region agronomist for Dairyland Seed, Rensselaer.
Gauck: Purdue University notes that soybean cyst nematodes, referred to as SCN, are a severe concern in Indiana. They have seen yield losses of up to 50% in soybeans. Many times, nematode problems are misdiagnosed as soil compaction, wet areas or nutrient deficiencies. SCN will cause poor root growth, stunting and yellowing of soybeans. Many people do not know they have nematode pressure until there is a major issue.
There is no in-season treatment, so having a plan before spring is important if you want to suppress your nematode population. The first step would be to test for SCN this fall, right after harvest. Testing involves pulling soil samples specifically for SCN and sending them to a lab. Once you receive your results, you can start to put a plan in place.
For fields with low pressure of SCN, you can use certain seed treatments on soybeans. If you have a large population of this pest, rotating to non-host crops will help lower populations
Like: I think SCN is more of a problem than most growers realize. Typically, SCN goes undetected unless the damage is bad enough to create visual symptoms. Testing your fields would be a good idea. However, effectively sampling for SCN can be difficult. Refer to advice from Purdue Extension for proper sampling times and procedures.
In many cases, fields that have had continuous soybeans and/or fields with sandier soil types would be the first place to look to find SCN. If you have a known problem, selecting SCN-resistant varieties can lower your risk for yield loss. Additionally, commonly used seed treatments like Saltro and Ilevo offer some protection from SCN.
Ritter: There is a reason soybean cyst nematode has been termed “the silent yield robber.” So you may have issues and aren’t aware yield loss is occurring. I would run an SCN test and know for sure. If you need SCN protection, most seed companies now are running a full product line with SCN genes. Companies are running PI88788 as the major source of resistance.
A few now have high-performance Peking lines. Previously, these lines were only used in extreme SCN situations. Now, they can be used in all levels of SCN infestation with great yield results.
As with any trait, it may be good to rotate sources of resistance. Consider changing your source of resistance if you have been repeatedly using the same source and have high SCN numbers.
Editor’s note: The CCAs point out two key facts about SCN. First, while it is most prevalent on sandy soils, it can exist anywhere, and yield loss can occur without visual symptoms. Second, some SCN populations are not as resistant to certain types of genetic resistance as they were at one time.
Back